Hochul could reduce ‘outright discrimination’ against special needs kids with the stroke of a pen, says head of Eden II 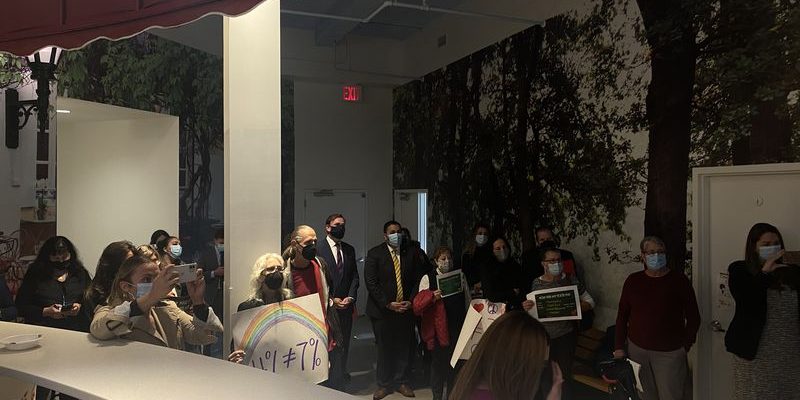 STATEN ISLAND, N.Y. — Therese D’Iorio has been at Eden II for only four years, but in that time she’s seen the endless turnover of teachers leaving for the better pay and benefits offered at the Department of Education (DOE).

She said Thursday at the Stapleton special needs school that she doesn’t want be part of that cycle, but Eden — along with all the New York schools serving the most vulnerable — needs Gov. Kathy Hochul to act if they hope to retain their dedicated teachers.

“I know as a teacher, it’s your dream to work at the DOE, [but] I fell in love with Eden,” D’Iorio said choking back tears. “I have seen children do tremendous things with their lives just in four years, so I can only imagine what I’m going to see if I can continue this.”

To help ensure they can compete with the DOE, the schools need the governor to sign legislation that would tie special needs schools’ annual funding to increases at other schools around the state.

Currently, that’s not the case. During a Thursday rally at the Beach Street school, parents, staff, and supporters held signs that read “4% ≠ 7%” demonstrating the disparity in last year’s bump.

For Dr. Joanne Gerenser, Eden II’s executive director, the Governor’s decision should be an easy one — the legislation passed unanimously in both chambers of the New York Legislature.

“The salary discrepancy between my teachers and a public school teacher can reach $40-50,000 a year,” she said. “Everybody’s feeling a staffing crisis. We are feeling it twice as hard, because the minute my teachers get vaccinated, the public schools recruit them.”

That constant turnover has led to staffing shortages at schools like Eden. Gerenser said their staffing levels are less than half of what they should be.

For parents, the turnover means their kids, who live with some of the most challenging conditions, need to constantly reacclimatize to new people, an experience that can be detrimental to an autistic child’s development.

“The bills are simply saying ‘give our schools’ the same tuition increases yearly that you give the public schools,’” Gerenser said. “It’s kind of hard to understand why [Hochul] wouldn’t sign it. Our families are looking at this like its outright discrimination.”

The ongoing disparity has led to on-the-ground consequences for schools around the state. Chris Treiber, the associate executive director for the InterAgency Council for Developmental Disability, said that 63 schools like Eden have closed around New York, about half of which were in the five boroughs.

That means some kids who need the most help are being forced to stay home. Michael Arvanites said if that had been the case for his brother Steven, who was one of Eden’s first students and still utilizes some of its programs, he wouldn’t have reached the best possible quality of life he has today.

“Without wonderful teachers, he’d be non-verbal. Now, he lives a great life,” Arvanites, who’s an Eden II board member, said. “He’s regressed during the pandemic, because he wasn’t able to go to Eden II programs.”

Fall, who served as one of co-sponsors of the legislation in his chamber, said Thursday that he had a brother with special needs, so it was a cause that he took personally.

“I want to see this come across the finish line, and make sure that the governor signs it into law,” he said. “We need to make sure we put the pressure on the governor to sign this into law.”