The closer my son, Andrew, got to 12 months old, the more evident it became that something was different; there was a lack of eye contact, a lack of response to my voice. Our autism odyssey officially began 14 years ago when Andrew was diagnosed at seventeen months. I was initially told his language delays were just fine, but in my soul, I knew there was more. My concerns were eventually realized when I was informed my child had a neurological disorder. I was handed a script for therapy into my shaking hands, and ushered out of the room with a grim “good luck”. In that moment, I felt so alone.

Before my son was born, I had a lot of expectations regarding my role as a mom. I envisioned a life of cheering on the sidelines at football games, even a run for president of the Student Council. But when my son was diagnosed with autism, I had to adjust some of my expectations. Instead of football games, life consisted of a full schedule of doctors, specialists, and therapists. It became overwhelming. That changed when I discovered Eden II. I wanted the best for him, and when I read about the history of Eden II and Joanne Gerenser, I knew it would be a perfect fit. Eden II has given my son and I so much hope. He has made great strides and continues to progress every day. Eden is, as many parents will tell you, “like winning the lottery”.

I realized Andrew was in the right place when he was around 5 years old-not potty-trained, no language. The staff at Eden II worked tirelessly to help and improve all of these concerns. I have gotten to know Andrew so much better, now that Eden has started me on the path to learning how to communicate with him. Eden encourages parents and loved ones not to give up when challenged with a roadblock, to persevere when discouraged, and to stand up and face those obstacles, even when you are dead tired and frustrated. Your precious child is so worth it and they need you to be their advocate, their voice in the world. I am so happy to have Eden be a part of my son’s life and mine.

“We are very grateful to the Eden II/Genesis staff”

Sami (center) with her family at the Genesis graduation ceremony.
My daughter Samantha was diagnosed with autism when she was 2 years old. We brought her to a neurologist after noticing that she was not meeting her developmental milestones, and something was not quite right. Her aggressive behaviors were constant, and she was making no progress living at home. My husband, Tom, and I, decided to place Sami in an out of state residential program. We knew that because of our daughter’s extremely challenging behaviors, she would never achieve the quality of life she deserved living with us.

Shortly after Sami entered her residential program, I received a call from Randy Horowitz, now the Deputy Executive Director of Long Island Programs. She said Eden II was interested in starting a residential program on Long Island, and if I would like to help. I said, “Yes!” Eight years later, Eden II opened its first residence on Long Island. With the tireless help of many others, we were able to have the residence approved and opened. Because of everyone’s overwhelming support, my daughter was able to move back to New York and enter The Genesis School. The staff worked very hard to help her maintain and learn new skills, along with preparing her to function as independently as possible.

In June 2014, I watched my beautiful daughter graduate from The Genesis School. As I watched her walk down the aisle in her cap and gown, I felt an overwhelming sense of pride for my daughter. She has grown from a child with constant aggressive and severe behaviors to a woman who was able to participate fully in her graduation ceremony and receive her diploma. We are forever grateful to all of the people that made a difference in her life. We are especially grateful to the Eden II/Genesis staff for giving her these opportunities and giving my family the chance to celebrate Sami’s many accomplishments. 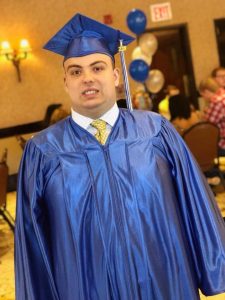 After 18 years, today Nicky will walk the halls of Eden II School program, a place that was his second home. He will still be part of the Eden II family beginning his new journey at their DXT Day Hab Adult program. I want to thank everyone at Eden who has touched our lives and has been part of Nicky’s amazing journey. Most have become our extended family. I have had the best teachers and staff help Nicky be the best he can be. I hope that we will continue to keep in touch with his wonderful friends and their families as well as his teachers and staff. Always know how you have made a difference in the life of my child who right in front of your eyes became the man he is today. We love and thank you all.